I love guns in video games; there’s a lot that look and sound really cool. Many games feature gun designs that are so iconic they become part of the identity of the game: there’s the versatile gravity gun in Half Life 2, the beefy assault rifle in Halo, clever portal gun in Portal, and beastly lancer in Gears of War.

Some guns are not only iconic in games, but in movies, even in real life. James Bond’s favourite pistol, the Walther PPK. Or the AK-47, perhaps the world’s most famous assault rifle, well-known in Counter-Strike and many other games, as well as real life - even the flag of Mozambique. Needless to say, their appeal is universal. 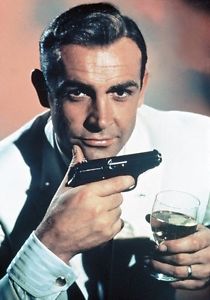 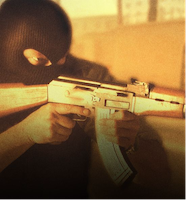 Let’s say you want to design some cool guns for your game. How would you do it? A lot of first-time designers might take bits they like and mash them together. There’s a lot of art kits and even some programs that allow you to do this. Unfortunately, the result often doesn’t make sense, and looks inconsistent.

Some designers try to make something that looks the part - guns with powerful-looking big chunky shapes, or cool-looking shiny streaks - but there’s often little sense going into these designs.

Instead I think form should follow function. Understand how a gun should work, how it’s held and operated, and you can design a gun that makes sense, fits the setting, and looks great.

Let’s try with a futuristic version of the humble firearm. Even today’s modern assault rifles are mechanically very simple, and are fundamentally very similar to the earliest firearms, like muskets and hand cannons.

It may not seem so at first; a modern firearm looks sleek, has many moving parts, and it’s not clear how they work just by looking at it. But break it down and you can see the basic components:

That’s it really, at least the basics. A common feature in semi-automatic and automatic firearms is a mechanism that uses some of the explosive power to load the next cartridge and ready the firing pin. For example, gas-operated firearms funnel some of the high-pressure gas from the barrel back towards the chamber, ejecting the spent case, loading the next one and cocking the hammer, ready to strike and fire the next round.

Even state-of-the-art firearms are simple machines. You might wonder why they’re not more complex, or more high tech. And they could be; we could, today, include features like electronic firing, caseless ammunition, and digital ammo counters, but they are seldom used in real guns, only in toys and prototypes.

The reason is twofold: cost and reliability. Guns are serious tools, used in extreme circumstances, and so reliability is a top concern. Having a gun fail in combat makes a life-and-death difference. Guns are also used in large quantities - there could be millions of them in a large army - so their cost needs to be reasonable. 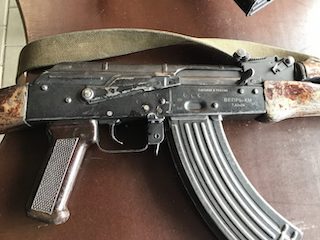 What this means is that even in the near future, firearms will resemble those of today, maybe with some whizzbang extras.

Let’s try with an example. Suppose it is 100 years from now, firearms technology has advanced to allow some of the aforementioned whizzbang to be reliable and widespread. But it won’t look radically different from today. After all, the venerable Colt 1911 pistol has been used by armies for almost a century! Today’s firearms won’t look so out of place even in the not-so-distant future.

So let’s start with the bare minimum. A firearm is like a hand-cannon, it needs a barrel, and something to load bullets at the end. Let’s stick with the humble magazine; it’s worked for centuries after all. [Caseless ammunition] means we can pack more cartridges in our magazine, and aren’t so limited in its shape, so it doesn’t have to curve like a banana.

Next we need some way to fire the gun. Keep it simple and stick with the grip-and-trigger that we humans are comfortable with. But let’s stop a moment and consider how the operator should hold and fire the gun. In theory, how the operator holds the gun isn’t beholden to its internals. What’s more important are the ergonomics, if the operator can hold, aim and fire comfortably and with precision. Look a the bullpup design, popular in many of today’s rifles, which moves the grip forward - away from the chamber - but allows the barrel to be moved back, shortening the overall size of the gun, and making it more comfortable to use.

Let’s go with the same layout. In our setting, it’s still important for operators to fire from the shoulder, as he/she needs to aim down the sights. So let’s place some grips where the weight of the gun will be well-supported, as well as a butt against the shoulder.

Now add the automatic mechanism. We want some sort of mechanical device to capture some of the explosive energy from the firing back to the chamber, to load the next round. Simple is always best, and to avoid interfering with the grips, it’ll be some tube-shaped device placed above the barrel, like it is with most firearms today.

And that’s the basics. Anything else from here is extra, and you have more leeway to add your own flair.

Next we’ll need a sight. Guns used to be mostly aimed with iron sights, crude but functional, and the most reliable. Many of today’s firearms now have more sophisticated sights, from those that offer more visibility, to telescoping, or even offer enhanced, night vision.

In our imagined future, sights are critical. They not only offer greatly enhanced vision: magnification, night, thermal, you name it; they also include vital tactical information, like heads-up display, maps, target recognition and IFF, and anything that the operator might want. Let’s take a page from concept future-soldier guns like the OICW, and put a big sight-computer on top for the operator to look at.

Don’t forget about firearms being hand-cannons: they get really hot! To prevent operators from burning themselves, the barrel should be covered with a shroud. This could look any way you want really, it just needs to prevent accidental contact with the barrel. If this were a machine gun, which gets so hot the barrel might warp and break, we’d have to seriously think about cooling, and add air holes and such, but that’s not the case here.

What about attachments? Some firearms today have rails where useful attachments - grenade launchers, foregrips, laser pointers - can be added. This very much depends on the operator though. Special forces love these as they can build their perfect, individualised weapon, whereas for general infantry, a standardised, all-purpose weapon is enough. Let’s go with the latter, but add a sensor-package, which integrates with our bulky sights.

Don’t forget that guns need to be carried around a lot. Let’s improve quality-of-life by adding carry-grips, pads and guards. Texture the grips, make it seem obvious where and how the operator should hold it.

Guns need to be maintained, to be reliable. For all these parts we’ve added, think about how they should be disassembled. Add clear separators, clips, rails and so on, how each part can pop and slide off.

Add the final dressing. Manufacturer’s markings, model numbers, [muzzle brake], power packs, rails. Think about the personality of the gun, and its history: perhaps its operator is a grizzled veteran, who’s added custom paint and unit markings, and the gun has scuffs and scratches on exposed areas. Maybe the gun itself is defective, has cracks or dents, and is patched together by bits of duct tape.

And there it is, we’ve designed a fictional future-firearm, from basic principles, and added our own flair and personality. I hope you agree that this not only looks practical but cool too! 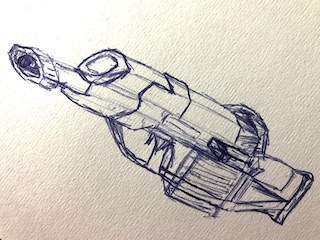 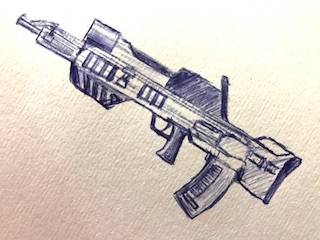