To make better games, one can look for similar games (not only in the same genre), and see what worked and what didn’t. One game I’m making is C-Dogs SDL, an overhead 8-directional shoot-em-up. A while ago I started looking for similar games, looking for cool features I can steal, but also for where they weren’t fun, and why. Bertram25 (of Valyria Tear and OpenDungeons) encouraged me to elaborate on some of my conclusions in a blog post, so here it is

What are Overhead 8-Directional Shoot-em-ups? 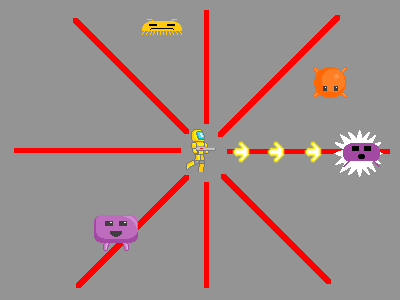 This mouthful of a sub-genre doesn’t get mentioned a lot. In a nutshell, it’s where you can move and shoot in 8 directions, from an overhead perspective. Sounds awfully specific, so people simply describe these games as top-down shooters or 2D shooters, which lumps them together with other sub-genres like twin-stick shooters (Geometry Wars), scrolling shooters (Gradius, most of the Touhou games), run-and-guns (Contra), even games like Asteroids (which have tank-controls, and includes the Strike series or even the on-foot sections of 2D GTA). Fans of those sub-genres will understand how different they are; each has different design lessons to learn.

Small differences in game mechanics can mean big changes in gameplay. I think overhead 8-directional shoot-em-ups strikes a sweet balance between movement and shooting, between tactical play and arcade action. The 8 directions means some, but not complete, freedom in engaging enemies around you. As a player, you will:

It is this close relation between moving and shooting, and limitations in both, that creates very dynamic gameplay. Great games in this sub-genre understand this, and design accordingly: map design, to weapons, to enemy AI. Let’s compare with its sibling sub-genres:

Overhead shooters have a long heritage; one of the first arcade games ever, Gun Fight, had players duelling with a two-stick control scheme - one to move, the other to aim and shoot. Through the 80’s game makers added features - powerups, different weapons - and tweaked game mechanics, learning valuable design lessons. 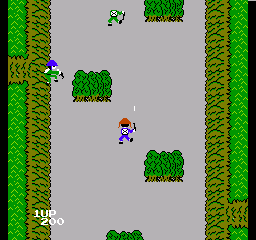 An early Taito game, this is a really underrated one with some neat ideas. You play as a soldier who can shoot a gun or throw grenades, the animations are hilarious, and you can even drive tanks! Nevertheless, it has significant flaws too:

Some of these flaws may be intentional, given that it’s a quarter-munching game at heart. It seems that the arcade version is much more superior to the NES port. The pacing in the NES port is really slow too. 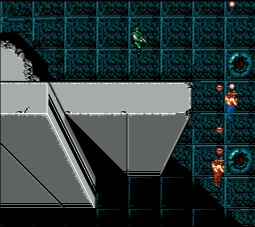 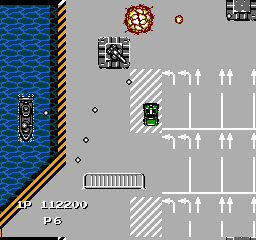 This duo of Konami-made classic NES games share many similarities, and are distinctive, quality entries in the subgenre. Not only are these games heaps of fun, they are also super polished, with great music as evidenced in the covers and remixes for Konami games in general.

These games really do a lot with the subgenre, with a great variety in enemies, powerups and weapons:

One downside, especially compared to their contemporaries, is that the pace is slow. Since both games have 1-hit-kills, stray bullets often send the player running in the opposite direction. Two possible improvements are: auto scroll, and removing 1-hit-kills.

Another significant flaw is that your player is quite close to the direction of scrolling, making you vulnerable to new enemies that appear suddenly. This is especially a problem in Jackal. Perhaps this is due to the arcade heritage (cheap, sudden deaths means more quarters), or to the NES’s low resolution. 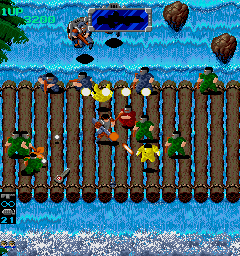 A late NES game, less well known but not for its quality, because it’s really awesome. Coming after seminal titles like the aforementioned Konami games and the influential Commando, Heavy Barrel benefited from the design lessons from those games. As a result this game sports many cool and powerful weapons, virtually all accessible in the first level. In fact the first level is a real tour-de-force demonstration of how awesome shooters can be.

This game is basically a more polished version of the earlier Commando game (and similar ones like Ikari Warriors and Gun.Smoke). As a result it’s pretty straightforward and repetitive: lots of enemies, lots of shooting. A few points are worth mentioning:

Overhead shooters really blossomed in this era. Enabled by technical advancements and more discerning players, game makers looked for all kinds of ways to enhance shooters, taking ideas from other genres and games, as well as simply adding more polish to what’s become an established genre.

Meanwhile in PC land, shooters saw lots of innovation from diverse game makers. Not only were these shooters creative, many were made with loving care; games like C-Dogs and its ilk were made by people who grew up with and genuinely adored these games. 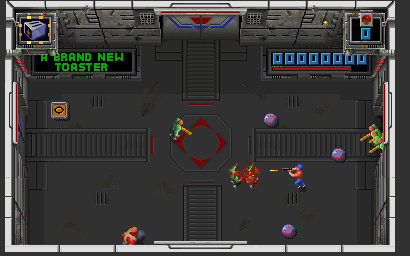 Perhaps the quintessential 8-directional twin-stick shooter; this enhanced remake of Robotron: 2084 distils everything great about overhead shooters into a no-nonsense, crazy-hectic arena shooter with a fantastically-absurd premise. Shoot endless hordes of enemies, get big powerups, fight ridiculous bosses, collect unending piles of cash. It’s simple and unsophisticated: the weapon selection is pretty standard, the enemies even more so - there are ones that run towards you, ones that run towards you faster, some that occasionally shoot you, others that run towards you in funny patterns.

Unfortunately the game suffers from a big flaw: uneven pacing. In between the ceaseless enemies and unpredictable powerups, it’s very hard to control difficulty and player experience. Sometimes normal levels with unfortunate powerup placement can be way more brutal than boss fights. This is a problem we’ll see again in a closely related game: Crimsonland. I think the game could really benefit from something like the AI Director; unfortunately this wouldn’t be developed until a decade later. 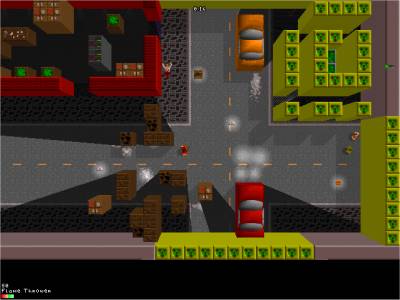 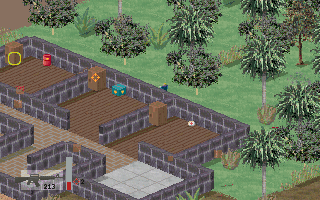 These two games share more than a few things in common. They were both made by Finns, were released around the same time (1995, 1997), have tank controls, and are chock full of 90’s shooter goodies. Tapan Kaikki has some of the most elaborate gore effects of any game: enemies explode in gibs, which leave blood trails, which you can kick (and leave more blood trails), and did I mention you can get your feet covered and leave bloody footprints? Assault Trooper on the other hand is full of interactivity and cool ideas; everything’s destructible, even the trees and walls. Both are very interesting examples to study.

Both games are unfortunately hampered by their tank controls - that is, players mainly move forward and rotate via keyboard controls. Both have strafing functions but they are quite awkward to use. Like other games with tank controls, aiming, especially at far targets, is challenging. Navigating twisty passages is likewise difficult. Both games feature lots of tight, indoor areas which are bad with tank controls; I remember dying endlessly in Assault Trooper because my grenade didn’t go where I wanted it to, and bounced back from a corner. My opinion is that tank controls should be avoided in indoor, fast-paced shooters for these reasons.

But don’t let that colour your perception of these games; they are flawed gems that are seriously underappreciated. 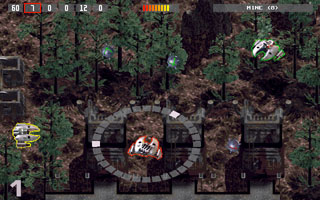 Compared to the last two games, these adapt well to tank controls. Recall that the two problems with tank controls are moving around in tight spaces and aiming at far targets. Both are about flying aircraft in wide-open spaces, rather than tight indoors. Both also solve the problem of low accuracy with interesting weapons and mechanics. In Strike’s case, there is a limited amount of auto-aim, which is cleverly explaned as having a “gunner”. In Fire Fight, there’s the cool “swarmer” weapon which fires a spread salvo of homing missiles.

Strike also has the interesting fuel mechanic, which is basically a draining health meter and you must scour the map for extra fuel to stay alive. It’s a good way of countering an otherwise slow-paced game, but this sort of resource mechanic has its problems too. 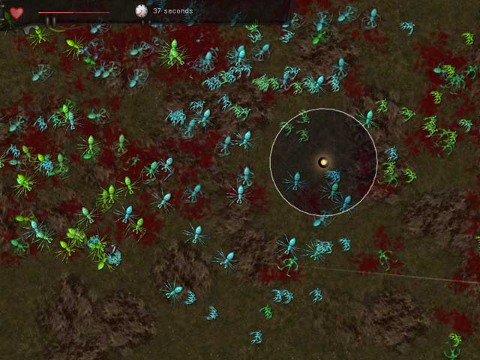 Coming after an era of gory shooters, Crimsonland plays like an unpretentious distillation of late-90’s game design sensibilities. It’s a twin-stick shooter with tons of everything: weapons, powerups, simple swarm enemies, an interesting perk system, and lots of blood decals. It’s great fun and uneven too, and it offers plenty of lessons:

Ultimately, I think Crimsonland is a great case-study on how less-is-more, at least for balance. There are so many weapons, powerups, perks and enemies that balance is simply impossible. Games that don’t rely on the number of weapons for content would do well with less, if they want to be balanced, for example. One type of game that thrives on variety however is roguelikes, and sadly Crimsonland missed this boat on becoming a game like Binding of Isaac or Nuclear Throne.

The core design of overhead shooters has been rather stagnant after the 90’s. There has been a lot of innovation at the fringes, like cinematic plots, but the basic mechanics are much the same. Titles like Alien Shooter, Shadowgrounds, and the recent Helldivers are all great, polished games, but their gameplay is often considered “retro”, and in many ways are less ambitious in their design as some of the creative entries from the 90’s. 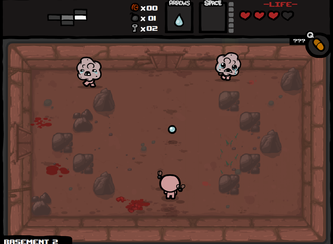 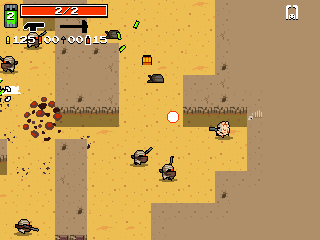 One exception is the games that marry overhead shooting action within a rogue-like framework. Exemplified by Binding of Isaac, but in this regard surpassed by Nuclear Throne, the marriage does a lot of justice to shooters - the myriad combinations of weapons and enemies typically seen in roguelikes makes these shooters more enjoyable than many traditional shooters, much as Crimsonland’s numerous weapons had.

This mixed-genre benefits the rogue-like aspect too; just as different weapons and enemies forces you to play the game differently, each run-through is a unique experience due to the items and powerups you happen to get.

I believe we’ll continue to see a steady trickle of great overhead shooters, because the genre is simple unadulterated fun. But there’ll always be room for innovation, whether that’s taking ideas from other, even unrelated genres, but also revisiting old games that had neat ideas but didn’t explore them to their fullest, or for whatever reason weren’t influential.

The same could be said for any genre, really. We ought to look back on games from the past, because they have a lot of lessons to teach, both what to do and what not to do.