Some of the most fun and interesting games feature three factions. The number 3 is a magic number, allowing for interesting asymmetries. You often see factions that are unique, provide lots of gameplay variety, and are flavourful too. But how do you mechanically balance three radically different factions? And how do you come up with three thematically unique factions?

It’s not easy. With just two factions, balance is a lot easier, as you simply buff one and nerf the other, but with three (or more) factions, anything you do could inadvertently affect the balance with the third faction.

One common method is to take a classic duality, and have two factions represent each extreme, with the third, “balanced” faction in the middle. TVTrope’s article on the subject mentions the classic duality of powerhouse/subversive. So one faction is a powerhouse, favouring raw strength, the second is subversive, favouring clever tactics and engagements, and the third balanced between the two.

How does this work? The important thing is that there is no inherent advantage to either side of this duality. The powerhouse is powerful but slow and predictable; the subversive is weak but fast and flexible.

A great example of this is in Westwood’s Dune RTS games and the unique tanks of each faction. The “evil”, powerhouse Harkonnen have the Devastator, the most powerful in the game but slow and ponderous. The “insidious”, subversive Ordos have the deviator, a tank which has no attack but can temporarily take over enemy tanks. The “noble”, balanced Atreides have the sonic tank, which apart from having a unique attack, is otherwise equivalent to a heavy tank. 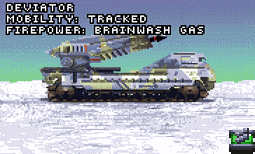 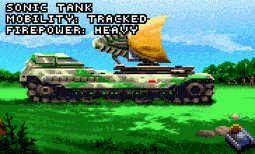 Another example of this (and of three factions in general) is, of course, Starcraft. The Protoss tend to have strong yet slow units, the Zerg have weaker, faster units and can expand faster, and the Terran are somewhere in between.

Duality also works thematically. In the classic good/evil dual, the middle ground is neutral - sometimes good, sometimes evil, but perhaps just driven by a morally ambiguous motive, like rational self-interest. A great example of this is the alignment system in Dungeons and Dragons, which also has another duality - law/chaos. 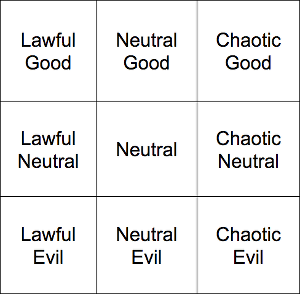 There are lots of thematic duals to consider. Magic/spirituality vs. technology/science, biology/nature vs. industry, East vs. West, men vs. women… endless examples if you look for it.

The problem with the “balanced”, “neutral” faction in dualities is that they can seem bland compared to the two extreme factions. To compensate, designers usually give them something unique. The neutral faction often has special abilities or some other desirable quality. 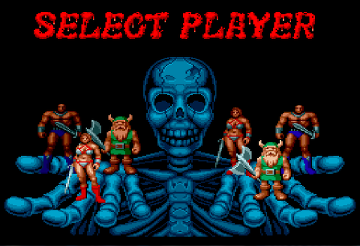 No one picks the boring man

For example, in Golden Axe the man is clearly supposed to be the “main” character, but because he is worse than the woman at magic and worse than the dwarf at physical attacks, most players avoided playing him in favour of the other two. 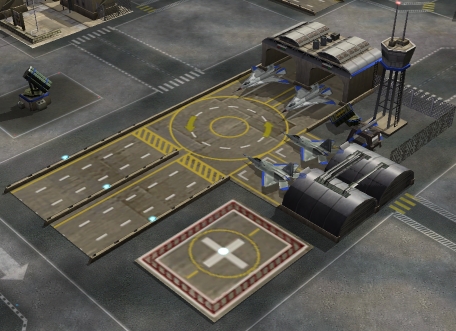 On the other hand, in C&C Generals, the balanced faction the USA is not as strong as China and not as subversive as GLA, but are compensated mechanically with having the most units with special abilities, and thematically by being the good guys. USA’s tanks can be augmented with special drones, and their infantry tends to have better special abilities, making them the most versatile faction.

Making the balanced faction more special works fine, but if you take this to its extreme, you get another approach: the radical third. Instead of having a faction that’s in-between a duality, it is so different from the other two that it’s not part of the duality at all.

An interesting way to make the third faction mechanically different is to make the rules work differently for them in some way. One is to give them different objectives entirely. In the Dune novels, the Emperor and Landsraad are in a balance of power, but the discreet Spacing Guild is often so influential that they can be kingmakers. What’s unique about them is that their objective is not the accumulation of power or wealth; their raison d’etre is to maintain that balance because for them, “the spice must flow”. A bit like the British’s foreign policy on maintaining the balance of power in Europe. 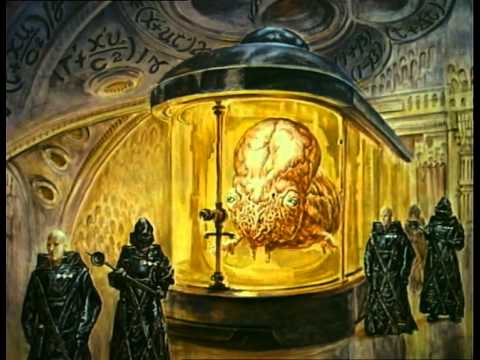 In Rise of Legends, the radical third faction, the Cuotl, are not only thematically unique - they’re aliens - but are logistically different, with different ways of gathering resources.

In Red Alert 2: Yuri’s Revenge, the Yuri faction has a unique mechanic: mind control, where enemy units can be converted to their own. This makes engagements very different, and mechanically the faction plays very differently to the other two. The Yuri faction was first seen as the weakest faction, but as players mastered the mind control mechanic, over time the faction has become the strongest; so strong that they are often banned at top-level tournaments!

And this illustrates one pitfall of having radically different factions; they become very hard to balance, and the balance can shift as the metagame evolves. Balance becomes an endless process, as seen by Starcraft’s two-decade legacy of patches, and constant shifts in dominant factions and strategies.

When it comes to radical third themes, a few usual suspects tend to pop up:

But there are also other creative choices. Criminal syndicates, hive minds, religious zealots, and so on.

There are other ways to balance three factions. Consider rock paper and scissors, where rock beats scissors, scissors beats paper, and paper beats rock, and apply this over the whole game. 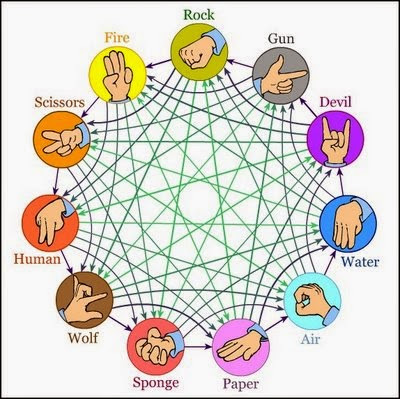 Your game probably shouldn’t be this complex

For example, let’s say there are factions A, B, and C. A’s infantry are the best, B’s mediocre, and C’s worst. But then maybe A’s vehicles are worst, B’s best, and C’s mediocre. And the situation is different yet again with aircraft, with A’s being mediocre, B’s worst, C’s best.

Thus, any non-mirror matchup contains plenty of asymmetries, but no faction has a clear advantage over the other, providing good balance and unique gameplay.

This is how Red Alert 3 is balanced; its three factions have different relative strengths in land, air and sea units, and is often considered the most balanced game of its series. 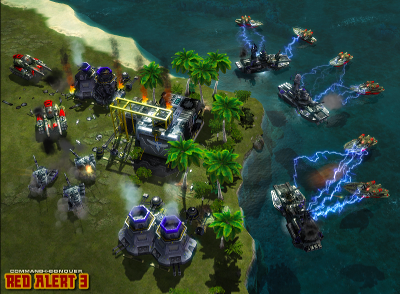 But there are downsides. All this mechanical complexity can overwhelm players, making the game feel over-designed and rules-heavy. Players often need to manage this extra faction calculus on top of the rock-paper-scissors structure of the base game, muddling the strategic aspect of the game. It also makes it harder to design things that affect the game’s rules, such as new maps, or new units. For example, a game with a heavy navy-based faction calculus means that new maps must have the “right” amount of water or risk being unbalanced - too much and the best navy faction dominates, too little and the opposite happens.

Complex mechanics can be a detriment to thematic design; it is harder to design memorable factions with unique characteristics when the mechanics are all over the place.

As is often the case with design, less is more.